WILDLIFE HABITAT MANAGEMENT​
​NO HUNTING • NO FISHING • NO TRAPPING

BRUSH PILES & DOWNED TREES
​CSVW puts the needs of wildlife above all else in its care and management of the forest and trails.
SAFETY
When a predator is nearby or in the sky, smaller mammals, reptiles and birds can quickly flit or scamper to the safety of a brush pile or under a fallen log and avoid predation.
Another way refuse is used as a safety cover is by providing a place to escape the elements whether wind, rain, snow or hot summer sun.   Many creatures need a shady place to help regulate their body temperature and some just prefer to stay dry and out of the rain/snow.

FOOD
Decaying wood can attract a large variety of insects and invertebrate species as they use the wood pulp and vegetation for food.   This in turn attracts larger animals and birds that use bugs and worms as an important food source.  A pile of branches, leaves or cut wood makes a terrific place for “gatherers” to store their food supply for later consumption.  For some species such as lichen, fungi and moss a downed tree can be host to all of their survival needs throughout their entire life cycle.

NEST SITES • DWELLINGS •  WINTER DENS
What critter doesn’t love a good pile of sticks or a great big fallen log?   Countless species depend on what lies on the forest floor for their homes, nests and dens.  Everything from insects, snakes, salamanders and worms; to mice, chipmunks and voles; to birds, rabbits and weasels make their homes on the ground.  Even larger animals such as foxes, bears and bobcats can make use of a hollow log; while a pile of leaves and twigs can be a fine place to bed down.

FOREST HEALTH
Removing everything that falls over or blows down in the forest can sometimes be a disservice to its ecology.  Eventually, a tree or brush pile will decay completely.  This stage is critically important and useful as that decay will nourish the earth.  The soil that the compost helps to create will generate and sustain
​new life in the forest hopefully for generations.
​2021
​WILDLIFE SIGHTINGS  &  HABITAT

Thank You Garden Volunteers
Sincere thanks to the four volunteers who helped to restore and maintain the lush perennial gardens that surround the Chapman House and Teacup Lake. Your hard work showed throughout the summer blooming season! Fall garden clean up efforts are underway and more hands are needed to help cut back the gardens and mulch them for the winter. If you love to garden, and have time to lend a hand, please contact CSVW trustee Sue Rowan at surowan@gmail.com for more information.
Granite United Way Day of Caring
On September 25th, PSU college students and volunteers from NH-based organizations swarmed CSVW to volunteer their time and talent as part of Granite United Way's Day of Caring. This enthusiastic, tireless crew tackled various tasks, including trail maintenance, gardening, and re-hanging the 50' - 60' long bird feeder line --- no easy feat! It was a beautiful day, and we thank you for your efforts! Enjoy these photos of some of the volunteers who came to make a difference at CSVW.
​2019
​WILDLIFE SIGHTINGS  &  HABITAT

WILDFLOWER & POLLINATOR GARDEN
This year the Wildflower Garden burst into bloom!
​
After a year or two of patient, persistent care and effort,  the half-acre Wildflower & Pollinator Garden in the Chapman Sanctuary and Visny Woods meadow bloomed spectacularly!   From early spring, through the summer and all the way into late autumn the field above Teacup Lake has been graced with glorious,
​native wildflowers.  What a treasure it has been from start to finish with shows of clover, daisies, lilies, berries, grasses and other varieties too numerous to list. 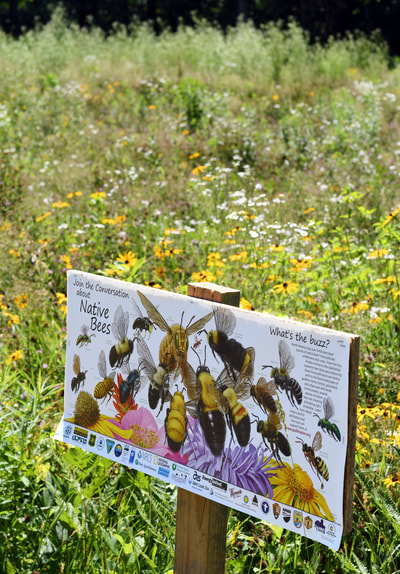 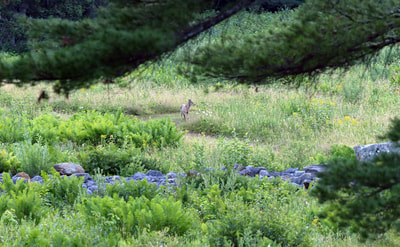 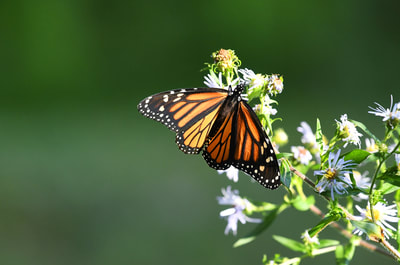 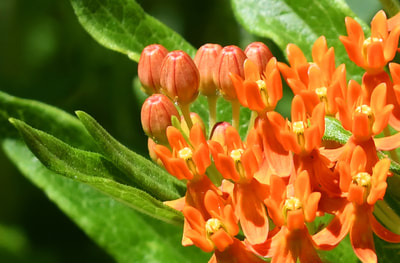 The Wildflower & Pollinator Garden was a huge success in attracting all manner of pollinators, birds and other wildlife.  Butterflies, bees, and all sorts of pollinating insects have benefitted from the many blooms planted specifically to provide them (and in turn larger mammals) with a multi-seasonal food source.  It is worth noting that Monarch Butterflies were present in good numbers and are likely to return to a successful habitat next year.

A Black Bear felt quite at home in the garden and spent many leisurely hours helping him/herself to the abundance of clovers and berries.  Coyotes were also a frequent presence in the Wildflower Garden.   They took advantage of the small mammals who were attracted by the food source and natural habitat options.  The coyotes would often bed down as a family right in the middle of the garden’s taller blooms and grasses.

Birds too were attracted to the Wildflower & Pollinator garden where they had more than enough insects to eat, while nectar-loving species also enjoyed lots of food options.  One particularly benefitted species was the population of Tree Swallows who were nesting in the CSVW Birdhouses.   Swallows didn’t need to travel far to catch insects for themselves or their nestlings and we had several successful nests this year.   There was consistently a terrific variety of wild birds in the garden, at the feeders, in the trees or down at
Teacup Lake on any given day:  Common Yellow-throats, Indigo Buntings, Eastern Blue-birds,
​Cedar Wax-wings, and the list goes on and on!

After the killing frosts but before the snow falls, the Wildflower & Pollinator Garden and the fields have been properly maintained by mowing and are all ready for a long New Hampshire winter.
​
We look forward  2019 and anticipate more successful blooms and a healthy wildlife population!

With the help of many volunteers, 61 shrubs & bushes along with 10 Crabapple trees were planted last summer/fall throughout CSVW.   A survey in late June 2017 confirmed that all of the Crabapple trees have survived the winter along with 56 of the shrubs and bushes.  When mature, these will become food sources for CSVW birds and animals.

All the CSVW bird houses were cleaned in late winter and new shavings added.  It was noted, while cleaning, that all of the bird houses had been occupied in 2016.   The bird boxes were occupied again this year and had successful nests of Tree Swallows and others.   Eastern Phoebes were hatched from under the eaves of the Chapman House and they grew safely to maturity there.  The CSVW feeders were visited by a great numbers of  Red-breasted Grosbeak, American Goldfinch, Hairy & Downy Woodpeckers, Purple & Red Finches,  House Finch and many other varieties.   Hermit Thrush and Vireos could be heard out in the forest and remained mostly out of sight.   A Scarlet Tanager was spotted in the trees behind the residence this year!
Overall there has been great numbers and diversity in the CSVW bird population this year.

Teacup Lake enjoyed a terrific assortment of birds and animals who found food & shelter in the water and along the edges.  There were plenty of newts, salamanders, turtles, snakes and frogs and insects of every description.  Hooded and Common Mergansers were seen often as were Baltimore Orioles, Red-winged Blackbirds, Common Yellow-throats and a long list of other warblers and sparrows taking advantage of the food sources and nesting possibilities.  A Great Blue Heron spent a few days in the tall grasses
catching frogs and surprise visit from a Solitary Sandpiper was a great addition to the
list of wildlife sightings at Teacup Lake!

Wildlife Habitat Management efforts on the trails help to provide open spaces for larger animals and CSVW did have bear and deer present in those areas.  There was a cow moose and her youngster frolicking in Teacup Lake this autumn!  A moose has been spotted on the River Trail as well.  During the Annual CSVW Bird Walk, a Wood Thrush was spotted in the brush piles left after the open-space clearing.  Other wildlife in residence this year  included muskrats, foxes, rabbits, river otter and other smaller animals and raptors.

June 18 & 25, 2016
​Volunteers spent the afternoon planting several variety of bushes including Serviceberry and Highbush Cranberry (viburnum trilobum) as part of Wildlife Habitat Management.  The edible fruit produced can attract and provide food for a variety of wildlife. 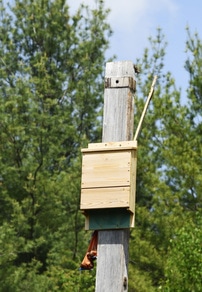 ​
4/20/16
Work on the final phase of thinning the wildlife habitat has ended.
The  holes needed to set the 30 ft. poles for the 2 Kestrel Hawk boxes and the 1 bat box are completed and poles will be set as soon as a truck crane is available.

1/1/16
The last phase of thinning (logging) the wildlife habitat will begin in mid January completing this phase of our Wildlife Habitat Management Plan.

​1/20/16
Work has started on thinning the wildlife habitat, please use caution while using the trails.


2/27/16
The CSVW invited Cub Pack 369 from Moultonbough to join sanctuary coordinator Sarah Norton in the cleaning and preparing of several birdhouses located on the sanctuary property in anticipation of the upcoming migration. What initially was to be an event on snowshoes turned out to be more of a hike due to the lack of snow. This did not however dull these scouts spirits. It turned out to be a beautiful day.

​Each scout and some of the parents took turns cleaning each birdhouse, adding new shavings and spraying the poles with ammonia to prevent any hungry or curious critters from trying to build their homes or make a meal of the new occupants. The scouts were excited to discover that in a few of the houses mice had built nests, and were amazed that they could climb the poles to get in the houses. The scouts also enjoyed reading several of the information stations located along the trails such as what a logging bow and a stone culvert were. All in all it was a great day. The scouts earned their Community Service Badges, had a great time on the trails with their friends and families and even learned a few things along the way.  We look forward to sharing many more outdoor experiences with these young adventurers.
​Photos on Calendar Page.
​